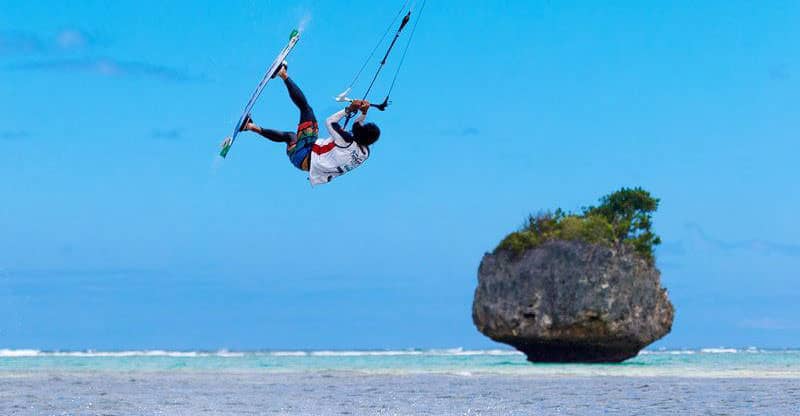 Boracay Island is the most popular kiteboarding and windsurfing destination in Asia. It packs a great combination of surf, night and beach life. All within a laid back atmosphere…

The surfing takes place at Bulabog Beach, a large and shallow bay on the east side of the island.

The nightlife and most other activities take place at the west side of the island, on White Beach. Walking from one beach to the other takes only 10 minutes.

Now that you know where the surfing beach is at, let’s talk about it in more detail…

Bulabog Beach is 1.5 kilometer wide and the distance from the shore to the reef is 400 meter, giving you an area of 6 hectare to surf in. 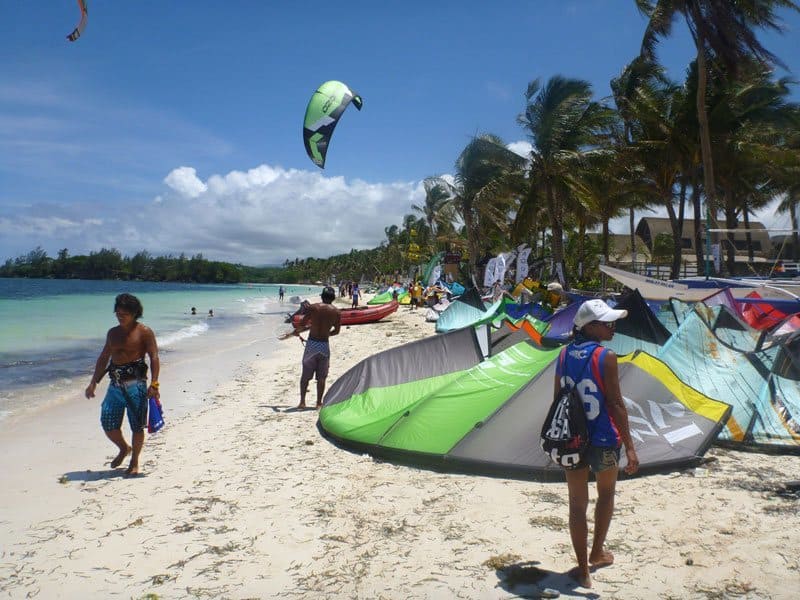 The average wind speed during windy season is 12 to 15 knots (up to 30+ knots). It’s on-shore and usually more strong in the morning. The morning also happens to be the most quiet time on the water since many surfers are still nurturing their hangover.

The water is flat and shallow during low tide and can become a bit choppy during high tide. From low to medium tide you can stand in the water in many places.

Tip: Boracay has its own weather station. You can check the tides, wind forecast and real-time wind speed at: BoracayWeatherStation.com

On thing I definitely recommend you do when you come to Boracay to kitesurf is: get some bulletproof booties. Because there are sea urchins in the water and you don’t want to be stuck on the shore after stepping on one of those spiky friends (I’ve seen it happen).

I own bulletproof booties from Ion and can vouch for their quality. They are great – get some before you come. Now every time when I step on a sea urchin and feel it pop under my weight I think “score” instead of “ouchhh”.

As for wetsuits, leave them at home. I recommend you only bring a rash guard, and an extra neoprene shirt that gives more warmth for the colder days. Really, you don’t need more then that. The water is warm. I only ever got cold when I am resting on the shore during colder days. That’s when I use my warmer neoprene shirt.

One thing I want to mention also is the water depth. Because if you’re a beginner or freestyler then you will probably prefer shallow water. If that’s you then I recommend you rent your equipment at a surfing school closer to the south side of the beach. It’s more shallow there and the water is more flat.

Now finally, I want to talk a bit about the crowds…

The surf can become a bit crowded during peak season. When it is crowded you have 2 effective options to escape the crowd:

1) surf in area about halfway or further down to the reef. There are way less surfers there and almost no beginners (most surfers stay close to the shore).

2) surf to the smaller sub-bay on the far south of Bulabog Beach. It’s easy to get to and there are way less surfers there as well.

Now I want to give some wind and kitesurfing specific instructions…

About windsurfing, my favorite place for that is actually in the north part (not the far north but around 1 fourth down south). There the water close to the shore is more deep. I like this because it allows me to take off and return very close to the shore. If you’re a beginner though I recommend the south, since the shallow water there will be easier to learn in.

Finally, for eating there is one great budget restaurant right in the middle of Bulabog beach called Happy Home. The food is cheap but tasty and the portions are big – so perfect for surfers.